Pilates for the lumbar spine 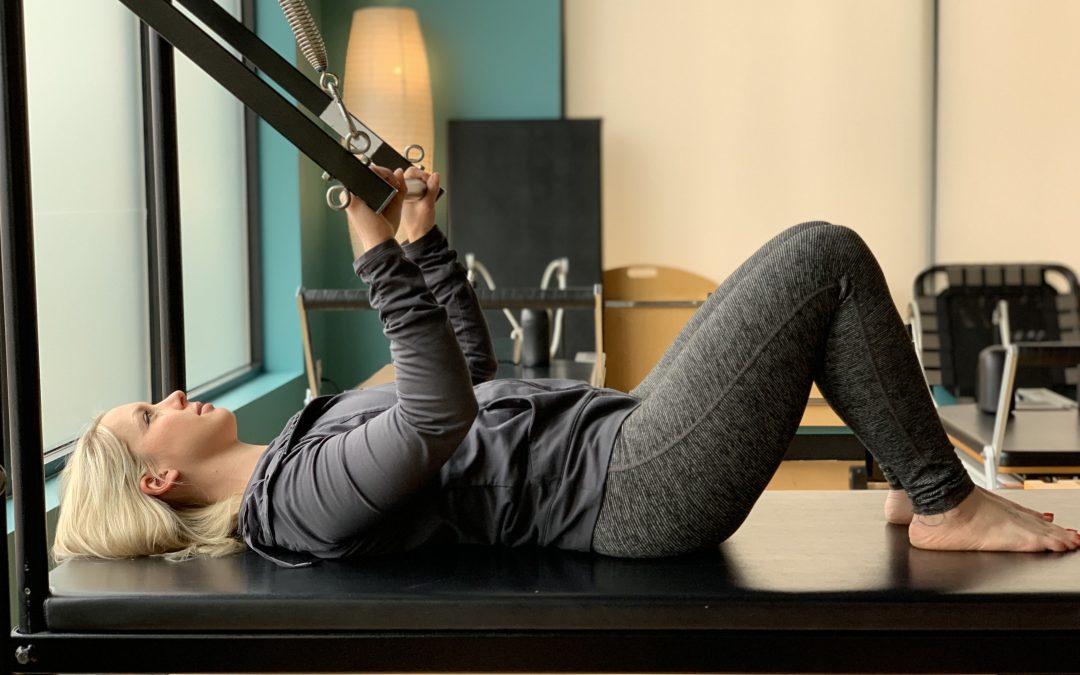 Stephanie Oldre started the MOVE instructor training program in 2017 after falling in love with Pilates and what it did for her body. That same year, she had x-rays taken of her back showing hyperlordosis, an exaggerated curve of the lumbar spine. Two years later, she’s celebrating a new and very different image of her lower back and putting her love of Pilates into practice on behalf of her clients.

From diving, swimming and weight-lifting to Pilates

Stephanie first fell in love with fitness and working out as a swimmer and diver in high school. She practiced twice per day and was encouraged to lift weights two to three times per week. She recalls, “We were encouraged to lift heavy, and I built up quite a bit of muscle. But stretching was never really taught or prioritized.”

During her time diving, Stephanie ended up hyperextending her back while attempting a reverse dive, which resulted in some lower back pain. She was able to get some massage therapy but otherwise maintained her usual workouts and continued to lift weights beyond high school.

In 2008, Stephanie had her first child through cesarean section. And over the course of the pregnancy, she gained an unexpected amount of weight. At 5 feet 2 inches tall, she had started her pregnancy at 130 pounds. At the time of delivery, she was 205 pounds, going down to 185 pounds shortly after.

“I had never been overweight before and this was really hard for me to deal with. I didn’t recognize myself in the mirror.”

While Stephanie did slowly lose the extra weight through returning to everyday activities like walking and waitressing, she quickly noticed that she’d also lost much of the strength she once had.

Around the time her son turned three-years-old, Stephanie joined a gym. But this time she had an interest in toning her body rather than simply building muscle, and heard that Pilates was the thing to do.

A passion for Pilates practice and efficient exercise

Stephanie was hooked from her very first Pilates experience. She practiced Mat Pilates regularly and saw differences in her body she’d never seen before.

“I fell in love. It felt as if I had core strength for the first time ever. Which is nuts considering I’d been so active with weight lifting in the past,” she says. “I was going to the gym just twice a week for Pilates and some cardio and ended up being my smallest size and lightest weight ever.”

Early on during Stephanie’s Pilates work, her instructor Ginger noted what a natural she was at it and suggested she might consider becoming an instructor herself. Stephanie, despite loving this new experience, had to laugh. With a young child and a very necessary full-time paycheck from her traditional desk job, it just didn’t seem feasible.

“Over the years, Ginger continued to encourage me to look into it. She could tell how much I loved it. But I continued to laugh it off as a dream idea.”

Deciding to become a Pilates instructor

Five years after the birth of her first son, Stephanie had a second child. And after a brief interruption to her new favorite fitness routine, Stephanie found her way back to Pilates and added some weight training back into her routine as well. But something still felt off.

“After I went back to work after maternity leave, it never felt right,” she remembers. “I was always wishing that I could somehow work a more flexible schedule so that I could be home with my kids. But when you have a good job with good money and benefits, that’s hard to do.”

However, Stephanie and her husband eventually decided that a change was doable and it was time for something else. And it didn’t take long for her to realize exactly what that something else should be.

Stephanie went back to her Pilates instructor and asked about next steps. Ginger sent her to Elaine Economou at MOVE Wellness, where she was able to join the new instructor training class. “I loved mat Pilates and loved helping people, but I didn’t know anything about Reformer or other equipment. I suddenly realized I had all these new tools at my disposal for helping people. It was intense and a great learning experience.”

That passion for learning and helping others was also evident to Elaine. “It was obvious Stephanie would make a great trainer. She told me this story about helping her father-in-law develop a fitness routine that eventually improved his health.”

Lower back pain, tight muscles and the lumbar spine

Over the course of Stephanie’s instructor training, she noticed some lower back pain and tightness, which she’d experienced for much of her life but had always dismissed as “normal.” But working through and analyzing posture during her training helped her see just how tight her lower back really was.

And Elaine noticed the same thing. “Stephanie was strong. But she had extremely tight hamstrings, hips, lower back and shoulders. Her erector spinae muscles, which run along either side of your spine, were really tight and that made it difficult for her to articulate her spine and get balanced movement.”

The same year that Stephanie began her training at MOVE, she started seeing a chiropractor who took x-rays of her spine that confirmed exactly what they had been seeing during her posture analysis in Pilates.

“I was only a little surprised to see that my tailbone was practically parallel to the floor.” But Stephanie knew that she now had the knowledge and tools at her disposal to do something about it.

From lordosis and a desk job to Pilates powerhouse

The bright side to Stephanie’s lordosis diagnosis was that she had the power to change it. Elaine notes, “I think that Stephanie’s lordosis was probably always there, but that her muscular imbalance and tense tissue, compounded by several years sitting at a desk job, gradually pulled her lumbar spine into a deeper curve.”

During her instructor training, Stephanie diligently chipped away at the tightness and tension she’d developed and brought balanced movement back to her body. She worked on integrating smaller muscles into stabilization, mobilizing her spine, and ultimately lengthening her back and relieving tension on those larger back muscles.

“For Stephanie, it truly was as simple as doing the exercises in a way that she could actually feel her body moving the way it was supposed to. Once she did that, her dedication and consistent practice took her the rest of the way,” says Elaine.

Stephanie had a clear, new goal. Stretch out that lower back and correct the degree of her lordotic curve using the Pilates principles from her training. She worked hard for the next year and noticed an increase in flexibility and mobility. She could sit up tall on her sitz bone without having to bend her knees and could feel the difference in the reach of her spine during certain stretches.

In April 2019, Stephanie went back to her chiropractor and had new x-rays taken of her back. The images spoke for themselves. The extreme curve to her lower back had been corrected. “I am living proof of what Pilates can do. And more important, I now know how to help other people with the same issues and can confidently say, “Yes, I CAN help you with that!”

For Stephanie, making a difference for her clients by helping them be more mobile and pain-free is the best part of her new job. And she’ll be the first one to tell you that experiencing limited mobility in her own body helps her relate to what others are going through.

“My favorite thing about teaching Pilates is knowing that I’m making a difference in so many lives. Hearing stories of what they can do now and what they weren’t able to do before. That never gets old.”

Elaine agrees that Stephanie’s own experience paved the way for a bright future in teaching and healing. “Stephanie really came to this work enjoying it in her body and with a desire to help others. She realized during instructor training that she could actually unravel her own unique postural issues. That, to me, is a great pathway to becoming a trainer.”

One of the biggest takeaways from Stephanie’s experience is that consistent Pilates practice with the help of a supportive, knowledgeable trainer can have a life-changing impact on your fitness. Having that set of expert eyes on your body and working toward relieving pain and increasing mobility, rather than just treating symptoms, sets the stage for aging well.

Recently, Stephanie was asked if she had a favorite Pilates exercise or apparatus. And true to form, her love of all things Pilates made it impossible to decide.

“There are so many good ones. I love the versatility of the Reformer and the challenge involved with chair exercises. Oblique work on the chair is awesome. Feet-in-straps on the reformer is just the best. But I love mat work. It’s what I first fell in love with and nothing can replace that. Side-lying leg work on the mat gets me every time.”

Ready to bring out the best in your own body? Find out what Pilates can do for your own fitness and health needs today.