How to Build Lasting Habits for the Holidays 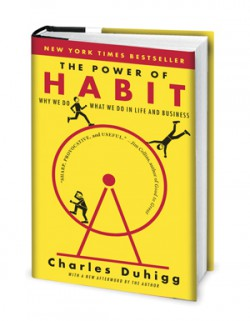 In 2012, habit master and author of The Power of Habit, Charles Duhigg, talked to Scientific American about the neuroscience of habits. He reveals that two parts of the brain–the basal ganglia and brainstem house habits. These are the same regions that are exploited by pharmaceuticals and drugs to induce compulsive, addictive behavior. And in a sense, ingrained habits work like addictions in that the brain is programmed to send and receive specific neural impulses over and over again when the habitual behavior is performed.  This is why habits are so hard to break. They are “literally etched in our neural pathways” as Psychology Today phrases it.

One way to break old habits is to overcrowd them with new, healthy habits. If you get an urge to reach for something sweet after every meal, you’ve programmed a habit. Some researchers have identified a phenomenon called the Habit Loop[1] to explain how habits operate. There is a cue that triggers the behavior (e.g. the time of day after dinner). After the cue comes the routine (eating dessert). And the outcome of the habit is the reward (e.g. feeling pleasure from dessert).

The cue, routine, and reward offer three different places to intervene with new, good habits. Usually, the reward, or what people want to receive from their bad habits, will always remain the same. We all typically want to feel pleasure and happiness and so engage in unhealthy habits that get us there. The problem is that these habits are unhealthy in the long run. So what do we do? You can target the cue and the routine facets of the Habit Loop.

First, identity a habit that you would like to implement. The trick is that the new habit must have the same reward as the old habit e.g. If your reward for eating dessert is feeling pleasure, going for a brisk walk or jog after dinner will give you an endorphin release. If it is the social aspect of eating dessert with someone, schedule a post-dinner activity you can do together (playing a board game, washing dishes together, etc.). Then pick a simple, easy-to-remember trigger. For instance, you can use 7:45 pm as your cue. Once it hits 7:45 pm, you know you’re supposed to engage in your habit.

Habits can take months to form, so don’t get discouraged if you’ve been at it for a few weeks. Eventually, they become part of your brain chemistry, which is why it’s critical to engage in good habits early on!

Need some support as you embark on healthy new habits for the year ahead? MOVE Wellness Studios’s expert Wellness Coaches can help! Contact us today to schedule an introductory session.